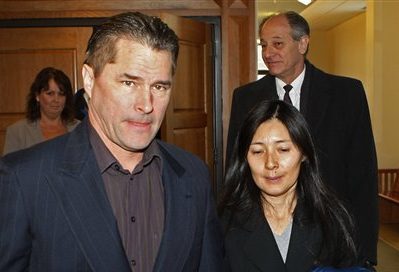 A couple who appeared on ABC’s reality show Wife Swap and later made up a fantastic joke that garnered worldwide attention have been pardoned by the Colorado governor.

In October 2009, Richard and Mayumi Heene claimed that their 6-year-old son Falcon was trapped in a Mylar balloon that went up into the sky.

The sensational story saw Police and National Guard helicopters follow the homemade helium device for more than two hours, watching 50 miles of people live around the world. Check out Katie Couric’s CBS news report from that day below.

As it turned out, the son was hiding in the family attic. The child’s mother later confessed that the family had planned the entire story to make it more marketable for a reality TV show.

According to the confession, the Heenes were sentenced by a court to pay $ 36,000 restitution and spent a month in jail after being convicted of influencing an officer and 20 days in jail for filing a false report. The couple claimed innocence in the conviction, but pleaded guilty to avoid deportation of the mother as she was not a US citizen.

Eventually, the family faced the truth and admitted that their actions were “for the show”.

In a statement released today. Colorado governor Jared Polis said it was time to move on – eleven years after the incident. “In the case of Richard and Mayumi Heene, the parents of the ‘balloon boy’, we are all ready to overcome the spectacle of a decade ago that wasted the precious time and resources of law enforcement officers and the public.

“Richard and Mayumi have paid the price in the public eye, served their sentences and it is time for all of us to move on,” he added. “It is time to no longer follow a permanent criminal record from the balloon boy saga and drag the parents down for the rest of their lives.”