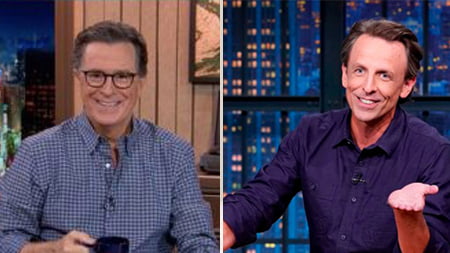 Numerous Americans, including politicians and Hollywood personalities, called for the impeachment of President Trump, citing the impeachment or 25th amendment, when his supporters forcibly stormed the U.S. Capitol on Wednesday.

Late night hosts Seth Meyers and Stephen Colbert reiterated the demands for accountability in their respective monologues on Thursday evening. During his “A Closer Look” segment, Meyers said that if justice is not served, the deadly storming of the politically motivated mob on Wednesday could very well happen again.

“It will happen again, so those responsible should be held accountable from top to bottom,” said Meyers. “You should be removed from the White House and expelled from Congress.”

He called on Ted Cruz and Josh Hawley to support the president, whom he described as an “urgent threat to national security”. Meyers also criticized members of the Trump administration who announced their resignation after the events on Wednesday, such as Betsy DeVos and Elaine Chao.

“If you’re in the administration and now you choose to step down within two weeks instead of facilitating its removal through impeachment or the 25th amendment, all you have to do is take care of yourself,” he said.

“[The video] contained none of the bravery of yesterday morning – no screams to stop the theft, no calls to action, no fomenting a senseless mob and declarations that it will never ever surrender, ”he said. “Also no apology or personal responsibility.”

Colbert continued, “He doesn’t mean a word about it. A man in front of a noose will say something to save his neck. All you need to know is that this man is scared. “

Watch Meyers’ segment above and Colbert’s below.