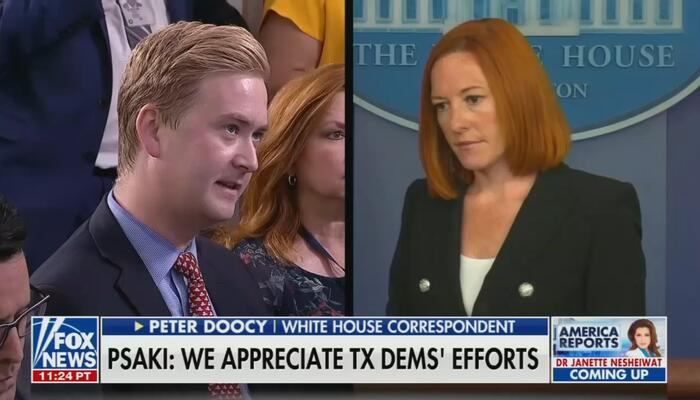 Tuesday’s White House press conference was a welcome respite when Fox News’s Peter Doocy ran into more than a few coworkers willing to join him to grill Press Secretary Jen Psaki when ten reporters (including Doocy) asked a question One after another, the Texas Democrats put Austin fleeing Washington, DC, triggering a superspreader of coronavirus cases.

When Doocy spoke, he was the third reporter to inquire about how the Texas Democrats spread COVID to both Capitol Hill and the White House. However, Doocy went with the word superspreader where his colleagues didn’t want to go.

“More than 10 percent of the traveling group with these Texas Democrats now claim to have a breakthrough. Are there any concerns that this trip, which was intended for voting rights, is now a superspread event in Washington? he asked.

One rude Psaki railed: “This is not a characterization we are doing from here,” but insisted that these “breakthrough cases” in unvaccinated individuals were evidence that vaccines were prior to “death”, “hospitalization” or even “severe “Protecting” illness (which is entirely correct).

Doocy’s second of four questions centered on whether the Texas Democrats should suffer a setback for their behavior: “Now that COVID-19 has reached the White House after contact with these Democrats, what is your message to these Democrats in Texas?”

Psaki shamelessly replied that the message shouldn’t be that their behavior should make people sick, but it should be one of them “Thank you for campaigning for the right to vote and the right of Americans to be heard in the voting booth.”

The other two questions from Doocy concerned whether the administration would support or even require a return to mask mandates (click “Expand”):

DOOCY: And certain places are now bringing back mask mandates, even for those who have been vaccinated. What does President Biden say about this?

PSAKI: Well Peter, we know that some employers, hospitals, health systems, colleges and universities have introduced mask requirements, some employers large and small have chosen to take this step. That is perfectly appropriate. That’s your decision. This is not an initiative we are taking from the federal government, but we know that companies, private sector employees, health care facilities and educational institutions will take steps to keep people safe in their community.

DOOCY: Six months ago, the president asked Americans to wear masks for 100 days. Is there a chance that if the delta variant spreads, he’ll ask a similar question across the board?

PSAKI: Well, nothing has changed in the guidance we are making available to the American public. You do not need to wear a mask if you are vaccinated. If you aren’t vaccinated, federal health officials recommend wearing a mask. Anything we would determine would be directed by our health and medical experts.

As mentioned earlier, Doocy wasn’t the first to bring up the cases. Aamer Madhani of the Associated Press started the Q&A by asking for confirmation “That a White House official also tested positive” and whether the cases would affect the Texas Democrats’ ability to meet with President Biden.

NBC’s Kelly O’Donnell came up next and asked for a specific number of “Breakthrough” cases “Among the staff of the White House” whether there would be Psaki “Public confirmation of cases … in the future” and whether there would be any changes in the protocols for interacting with the President and Vice-President.

As usual, Psaki’s answers were nothing more than a salad of words.

O’KEEFE: Well, I just want to support this landmark case here in the White House.

O’KEEFE: You confirmed today that there was a breakthrough case.

O’KEEFE: But you also acknowledge that there have been other landmark cases.

O’KEEFE: But you hadn’t announced beforehand that it existed.

PSAKI: And that’s right. We had also stated during the transition that I think there are hundreds of thousands of people working in the federal government, as you all know. And we made a commitment during the transition that we would make this information publicly available if it was a designated officer who is the most senior person in the White House and in this building. We stand by this obligation.

O’KEEFE: So if there’s anyone below, don’t you feel the need to let people know?

PSAKI: That’s the commitment we made. I am speaking to all of you today and sharing information about the person who received a positive test yesterday.

ABC’s Rachel Scott tried to get an answer to O’Donnell’s question about the total number of administrative officials infected with the virus, but Psaki passed the money on by saying she would “like to check the status.”

Shortly after Reuters’ Nandita Bose asked unsuccessfully whether groundbreaking cases would increase vaccine hesitation, NPR’s Tamara Keith sought answers on further transmission, the number of military officers in the White House and whether the cases “Create a messaging challenge for this White House to have breakthrough infections.”

In response to these questions, Psaki either distracted, said she would be back in touch, or reiterated that the country is actually doing pretty well on adult vaccinations. In addition, she suggested that those vaccinated should not (as some have done) get upset about the Delta variant.

To view the relevant transcript from the July 20th briefing, click Here.