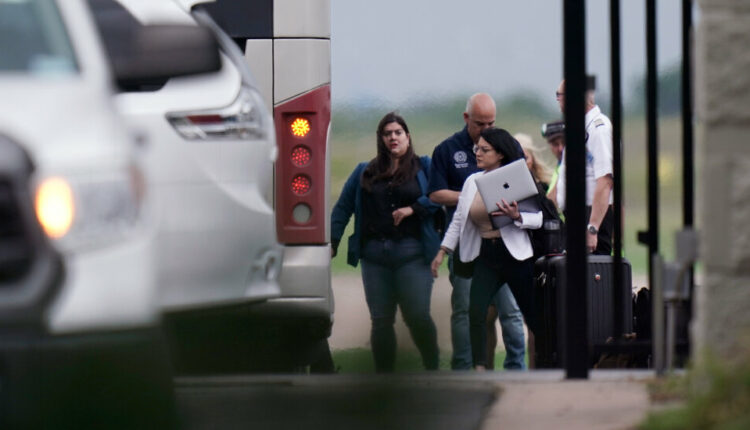 STERLING, Virginia – Texas Democrats fled the state Monday to prevent the Republican-controlled legislature from passing a restrictive new electoral law and headed to Washington to draw national attention to their cause.

The group left Austin that afternoon on two charter flights that arrived at Dulles International Airport just before sunset. An official involved in the effort said more than 51 of the 67 Democrats in the state house had signed, enough to prevent Texas Republicans from reaching a quorum necessary to conduct state business.

The hastily arranged departure added a cinematic element to the partisan tussle in a state with a turbulent political history. Democrats have fled to neighboring states in the past trying to block laws, including in 2003 when they traveled to New Mexico and Oklahoma to avoid attempts by Republicans to redefine congressional districts.

The move could cripple the legislature for weeks if the Democrats don’t stay in the state until the end of that special session in August. Still, it shows their limited options in the long run in a legislature where Republicans hold a majority in both houses. Parliamentary procedures and efforts to get amendments can delay the process, but not cause it to fail. Republicans said Monday the Democratic move would ultimately fail.

State Representative Briscoe Cain, a Republican from the Houston area who chairs the House Electoral Committee, said the Democrats’ departure “slows things down,” but would not prevent Republicans from getting their way.

“It just delays the inevitable,” said Cain, describing the move as “political theater.” “We’ll make it one day, this or another special one.”

Still, the Texas Democrats hoped to put pressure on the Senate Democrats, who have so far been unable to pass federal laws to resolve the problem, by mass trips to Washington.

“We have to decide whether we stand up for democracy,” said state representative Trey Martinez Fischer, who organized the exit. “We want the nation to join us and we want the US Senate to hear us and act.”

The move comes just a day before President Biden is due to deliver a grand speech on voting rights in Philadelphia. Activists have pleaded with the government to address the issue with greater urgency.

In a press conference at the White House Monday, Jen Psaki, the White House press secretary, said Mr Biden would focus his speech on a broad and targeted response to new restrictive electoral laws across the country. The recently passed Republican-sponsored electoral laws, said Ms. Psaki, are “the worst challenge to our democracy since the civil war”.

The Democrats’ escape in the House of Representatives is the second time in six weeks that they have resorted to extreme measures to try to prevent the passage of a new voting law. Hours before The regularly scheduled session of the Legislature ended in May, with Democrats leaving the Capitol House to deny Republicans a quorum, despite only traveling a few miles to a nearby church in this case.

Governor Greg Abbott, a Republican, responded to the initial strike by convening a 30-day special session that began Thursday. Along with the voting proposals, the governor called on lawmakers to take other measures that democratic lawmakers oppose: tackling perceived “censorship” on social media platforms; Prohibition of teaching “critical racial theory” in public schools; and restricting transgender athletes from participating in school sports.

Leading Democrats on Monday praised Texas lawmakers for taking a stand on a critical issue. “I applaud you for standing up for the right of all Americans and all Texans to have their voice unencumbered by their voices,” said Vice President Kamala Harris at an event in Detroit.

Senator Amy Klobuchar of Minnesota, who oversaw a group of Texas House Democrats as they visited the Capitol after their first strike, said the arrival of the Texans will highlight the “many vehicles” in which federal electoral reforms could be passed.

“They are coming to the one place that should bring them salvation and it is time to do so,” she said in a telephone interview.

But the Texas Republicans suggested that the Democrats give up their responsibilities by leaving the state.

Tony Tinderholt, a Conservative Republican from Arlington, said Democratic lawmakers should be “held accountable” for not being back in their seats when the house resumes work at 10am Tuesday. Mr Tinderholt has tabled a resolution that would punish members who leave the Chamber during deliberations to break a quorum.

“We have all sworn an oath of office, we have a duty,” he said. “When you work for a company and you didn’t like what they did that day and you decided to skip work. I think most people would be fired and punished. “

Dade Phelan, the Republican spokesman for the State House of Representatives, said he would use lawyers / etc to look for options under the constitution and house rules

reprimanded the Democrats for leaving, while legislative funding – which Mr Abbott vetoed and which was on the agenda for the special session – remains pending. “These measures jeopardize government funding that denies thousands of hard-working employees and their families paychecks, health benefits and retirement plans so lawmakers who have broken the quorum can fly to Washington DC on private jets,” he said.

Dan Patrick, the lieutenant governor, mocked the Democrats by tweeting a photo of them preparing for the trip with a case of beer on one of the seats.

No Democratic State Senate members were believed to be accompanying their House counterparts, and Republicans expressed hope that Senate members would appear for Tuesday’s session, although no bill can be passed with the approval of only one chamber.

Senator John Whitmire, a Houston Democrat, said he expected the chamber to take up the voting bill on Tuesday, and said Senate party members hadn’t made plans similar to their House counterparts.

“Senate Democrats keep all options open,” said Whitmire. “I don’t know that a consensus was reached.”

In recent months, Democrats across the country have grappled with one of the most far-reaching restrictions on electoral access in generations. Republican-controlled legislatures in more than 14 states have passed electoral laws that include sweeping new restrictions on voting.

But the Texas bill is among the most far-reaching and comprehensive efforts to restrict the right to vote in a state already considered one of the most difficult in the country to cast, with Democrats and constituencies claiming that passing the bill is the very democratic foundation of the state.

Among other provisions, the latest Republican proposal would ban 24-hour and drive-through voting; add new requirements to identify voters for postal voting; Increase in criminal penalties for election workers who violate the rules; and greatly expand the authority and autonomy of party election observers.

Over the weekend, the Texas House and Senate, both Republican-controlled, brought legislation out of committee and into full chamber after marathon sessions that lasted nearly 24 hours in the case of the House of Representatives. The GOP leaders planned to move towards a final vote starting Tuesday.

Mr Abbott, the governor, is up for re-election next year and faces the toughest challenges of several Conservative Republicans, including former MP Allen West, whose term as leader of the Texas Republican Party ended over the weekend. He said that overhauling the state’s electoral system was one of his top priorities.

On Monday, Mr. Abbott said the flight of members of the Democratic House from Texas “is harming the Texans they have chosen to serve,” and urged members to “return to the job they were chosen to do” .

If Democrats leave the state and refuse to have a quorum until the special session ends at the end of the month, Mr. Abbott can simply call another. He is sure to call at least one more session later this year to pass new Congressional and legislative plans and allocate billions of dollars to federal pandemic aid.

The Texas Democrats used their temporary victory in May to publicize their efforts to block new Republican electoral laws and the Senate debate over state voter protection. They traveled to Washington to influence senators in the Capitol and met with Ms. Harris in the White House.

But efforts by Democrats in Congress to pass a sweeping new electoral law, the For the People Act, stalled last month when Republicans blocked it in the Senate.

The escape of the Texas Democrats follows several days of internal deliberations on how aggressively to oppose Republican election proposals. While a group of progressive young MPs advocated leaving the state, the party’s leadership had been more cautious and called for a plan to force a series of votes on amendments to water down the voting law.

The Democrats’ reluctance to flee the state evaporated over the weekend when liberal activists, Texan citizens and Beto O’Rourke, the former Congressman who is the state party’s most popular figure, testified at a hearing on Saturday morning that was nearly Sept. Lasted hours.

There was enough momentum late Sunday afternoon, the Democratic leaders who privately warned against abandoning the plan.

While leaving the state will generate a flurry of attention and a boost in fundraising, the move is not without its risks. Aside from being away from home and their families for several weeks, Texas state lawmakers are part-time and many have other jobs that they may not be able to report on remotely. And without a quorum, lawmakers will not be able to approve the funding of salaries for themselves or their employees, which Mr Abbott vetoed in June after the first strike.

Guillain Barre Might Be a Tragic, Although Uncommon, Aspect Impact. Employers Ought to Promote Covid Vaccines Anyway