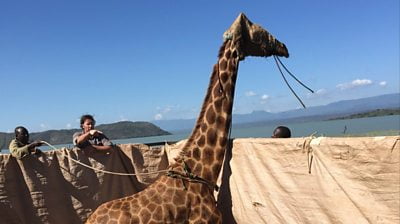 Giraffes are rescued by raft in Kenya after the peninsula they live on was cut off by floods and a new island was formed.

The eight Rothchild giraffes being rehabilitated make up an estimated one percent of the country’s increasingly rare species, according to the charity Save Giraffes Now.

In this way, the rescue operation – and their specially designed rafts – help save them.