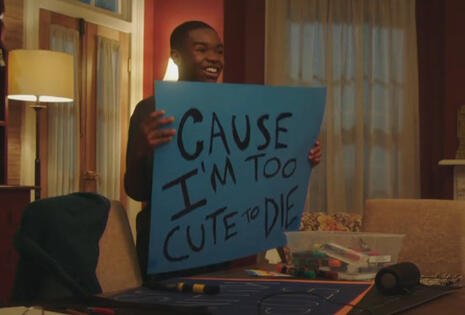 It’s no secret how most of the shows play on the Black Lives Matter line this season. Worse, most police broadcasts follow suit by insulting their own profession. CBS’s NCIS: New Orleans joins the ever-growing list by introducing a teenage protester for BLM with the slogan characters to prove it.

The December 13 episode, “We All Fall …” follows an ongoing NCIS plot to investigate cases of police officers making excessive complaints about violence. After an officer is killed after attempting to testify against the police, the team endeavors to develop a case against the corrupt officers. Corrupt officials are nothing new to a crime drama, but NCIS: New Orleans is trying to treat it like a big conspiracy, trying to start a RICO case and everything.

Meanwhile, CJ (Alkoya Brunson), Loretta’s (CCH Pounder) sixteen-year-old son, helps organize a BLM protest with his friends. This includes a sign saying “My life matters,” “Because I’m too cute to die,” and of course one on the table that says “Stop killing us.”

Loretta is a coroner, which means she should know better who exactly kills black people, and that murder is the number one killer of black boys like her son. But last season has proven that she is unwilling to give cops the benefit of the doubt when it comes to the shooting of black suspects. Unfortunately, she doesn’t defend the police again and even suggests taking part in a protest against Black Lives Matter next weekend.

The murder rate in New Orleans is growing, but not from cops shooting teenagers. There are fewer cops available to take on growing drug gangs who are much more likely to kill boys like CJ anyway. If BLM were willing to march on such issues, we could actually get results. Instead, we just get a disenfranchised police system and even more crime. It’s clear guys like CJ don’t matter.

This show is sponsored by commercials from Subaru, Target, and Geico.

Guinness Groups Up With The Metropolis Of Baltimore For New Apprenticeship