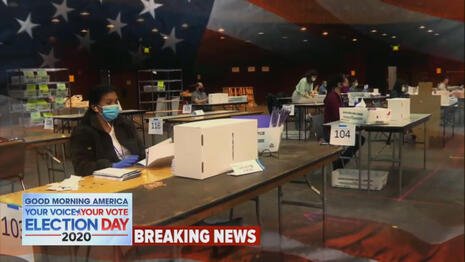 Trick Query: Guess How Many Journalists Voted for Trump This Yr?

Every four years since 2000, readers of the online opinion site Slate have been able to see how their employees have voted in the presidential elections. It is a laudable exercise in terms of transparency, especially in a profession where many journalists, without exception, promote liberal politicians and liberal positions, just for the sake of it deny their work is influenced by their opinions.

This year, the survey foundNot a single Slate employee voted for President Trump, despite more than 74,200,000 other Americans voting – a record for a Republican candidate. By comparison, 56 employees said they voted for Joe Biden (98%), one who selected the Greens candidate Howie Hawkins (2%), and an intern who had not yet signed up by November 2nd had chosen between Hawkins and Biden.

The employee survey revealed four years ago a similar inclination: 59 votes (97%) for Democrat Hillary Clinton, one for Green candidate Jill Stein, one written vote for independent candidate Evan McMullin and none for Donald Trump.

According to this year’s post“The last time a Slate employee voted Republicans in this poll was in 2012 for Romney. Will this be the last time? It’s more because of the Republican Party than Slate. “

The question is whether Slate is pointing to the broader liberal media establishment. Given their coverage, it’s hard to imagine that anyone on the New York Times, Washington Post, CNN, MSNBC, or any of the broadcast networks voted for Trump. And let’s not forget that Joe Biden won 93% of this year’s newspaper commentscompared to just seven percent for Trump.

We can also compare Slate’s record with surveys of journalists carried out by various scholars and organizations over the past few decades. While some elite journalists surveyed and others looked at a broader sample that included small-town newspapers, these surveys invariably found a massive gap between the media and the public.

Another survey (Rothman & Black) found that in 1988 76% of elite journalists voted for Michael Dukakis, while 91% voted for Bill Clinton. And after George W. Bush won re-election in 2004, the University of Connecticut Journalists nationwide preferred John Kerry by a wide margin over Bush, 52% to 19%.

This year’s Slate poll also makes it clear that their employees wanted a far more leftist candidate than Biden. 77% said they voted for either Elizabeth Warren (20 votes) or Bernie Sanders (seven votes) in the Democratic primary. 20% for Biden (seven votes) and three percent (only one vote) for former South Bend, Indiana Mayor Pete Buttigieg.

Here is a selection of the staff comment where everyone explained their votes (click Here for the whole):

■ Sam Adams, Senior Editor: “The entire Republican Party must be driven into the sea optionally.”

■ Christina Cauterucci, Associate: “I voted for Joe Biden because the nation and the planet as we know them will not survive another four years under Donald Trump.” (In 2016, Cauterucci stated her voice as follows: “I have Voted Clinton with my vagina for all the reasons I loved her in elementary school … “)

■ Matthew Dessem, Arts Editor for Nights and Weekends: “I voted for Bernie Sanders in elementary school because I was hoping I wouldn’t spend my old age riding a rusty jet ski up and down the Arizona coast and while washing gasoline and canned food Avoid the deacon and his gang of murderous thugs … “

■ Shasha Léonard, system administrator: “Instead of wasting my vote in the majority, I will vote for the Green Party, whose platform is pushing for progressive guidelines like Medicare for All, the elimination of student debt and private prisons, etc.”

■ Abby McIntyre, Assistant Editor-in-Chief: “I believe black lives matter, climate change is a serious threat, billionaires should pay more taxes, women have the right to vote, trans rights are human rights, immigrants improve our country, the minimum wage is way too low, health care should be taken for granted, childcare should be affordable, the science is real, and there is a racist, lying, plausibly accused rapist who has used the presidency solely to get himself and his family at the expense of Americans enrich the people in the White House are not great. “

■ Laura Miller, books and culture columnist: “Even if Trump weren’t the anti-Christian, I would have voted democratically as always.”

■ Nitish Pahwa, Editor: “Sanders is the only national political figure in my life who has been the hardest and loudest in many issues that have long been close to my heart – civil rights, income inequality, climate change, public benefit for everyone, our imperialist foreign policy and interventions, our unjust trade deals – and had the record to prove it. “

■ Asha Saluja, Podcast Operations Manager: “The day after Trump’s election was unthinkably overwhelming, and since then many more devastating days have passed – the evil of the GOP has metastasized to make life in this country so bleak.”

■ Aviva Shen, Senior Editor: “Like many people, I see Joe Biden’s choice as harm reduction at best. And in the case of a competitive election, I want to maximize Biden’s number of votes. But further down the vote, I had to vote for two real socialists who won democratic primary elections for state legislative seats. “

■ Sofie Werthan, Social Media Editor: “I am not enthusiastic about Biden’s moderate positions and I am concerned that he lacks the courage, vision and perseverance required to implement the ongoing changes that this country is bringing needs in my opinion (such as universal health care, racial justice), economic justice and a proactive plan to combat climate change). “