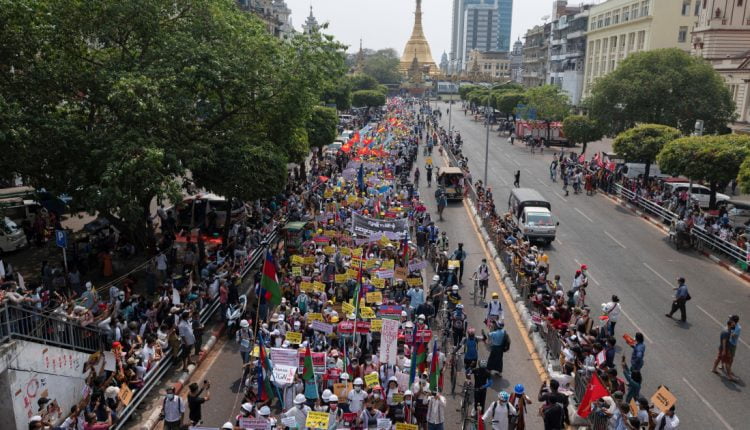 The UK and Canada have sanctioned the ruling generals in Myanmar for overthrowing the civilian-led government, while Japan agrees with the United States, India and Australia that democracy must be quickly restored there.

Western countries have condemned the overthrow and imprisonment on February 1st of elected leader Aung San Suu Kyi, who also brought daily mass demonstrations to the streets of the Southeast Asian country.

Following the US sanctions announced last week, both the UK and Canada announced measures on Thursday.

The UK said it would impose asset freezes and travel bans on three generals, while Canada announced it would crack down on nine military officials.

“Together with our international allies, we will hold the Myanmar military accountable for their human rights violations and seek justice for the Myanmar people,” said British Foreign Minister Dominic Raab.

Britain had already imposed sanctions on military leader Min Aung Hlaing and charged him with human rights violations against Rohingya Muslims and other ethnic minority groups.

The Myanmar government did not immediately respond to the new sanctions. On Tuesday, an army spokesman told a press conference that sanctions were expected.

The coup halted a temporary transition to democracy that began in 2011 after nearly half a century of military rule and, despite generals’ promises to hold fair elections, raised fears of a return to an old era of isolation.

Also on Thursday, Japanese Foreign Minister Toshimitsu Motegi said he had agreed with his colleagues from the USA, India and Australia in the so-called Quad group that democracy in Myanmar must be restored quickly.

However, the Myanmar army has closer ties with neighboring China and Russia, which have taken a softer approach.

There is little history of Myanmar’s generals giving in to foreign pressure.

But they also face a challenge in the country of 54 million through protests that have drawn hundreds of thousands of people and strikes that have paralyzed much of the business of government.

“I don’t want to wake up in a dictatorship. We don’t want to live in fear for the rest of our lives, ”said Ko Soe Min, who was traveling in the capital, Yangon, where tens of thousands took to the streets a day after some of the biggest protests yet.

The marches were more peaceful than the bloodily suppressed demonstrations that took place during an earlier half century of military rule, but police fired rubber bullets several times to disperse the protesters.

A protester is expected to die after being shot in the head in the capital, Naypyidaw last week. The army says a police officer died as a result of a protest.

Protesters gathered in the second largest city, Mandalay, on Thursday to demand the release of two officials arrested in the coup. Police fired water cannons at Naypyidaw to disperse a crowd approaching the police lines.

Police and soldiers used catapults to end a protest in the northern city of Myitkyina, a resident said.

In the old capital of Bagan, people with banners and flags marched in colorful processions against the backdrop of ancient temples. Some protesters stopped at a temple to curse dictators, a witness said.

Protesters march near temples in Bagan, Myanmar, during a protest against the military coup [Stringer/Reuters]The army took power after the Electoral Commission rejected allegations of fraud in a November 8 election won by Aung San Suu Kyi’s National League for Democracy.

Aung San Suu Kyi is charged with violating a natural disaster management law and illegally importing six walkie-talkie radios. Her next appearance in court is scheduled for March 1st.

75-year-old Suu Kyi spent almost 15 years under house arrest for advocacy for democracy and won the 1991 Nobel Peace Prize for her struggle.

The number of people known to have been arrested since the coup had reached 495 as of Wednesday, of whom 460 were still being held, Myanmar’s Political Prisoner Agency said.