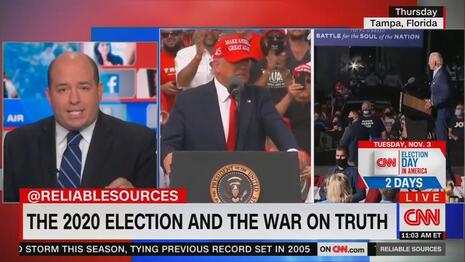 CNN’s Brian Stelter Echoes Biden: ‘Reality Is On the Poll!’

In the last pre-election issue of CNN’s Reliable Sources, host Brian Stelter published another of his Trump trashing essays on how he and CNN stand for “truth”. What will he do with his show if Biden wins?

Stelter could never admit that CNN fabricated narratives and distorted facts to further their own ideological goals and preferred candidates. Just last week, an MRC study portrayed this reality on the broadcast networks, with the coverage greatly favoring their beloved Joe Biden over President Trump.

Stelter repeated the theme of his book Hoax, denouncing Trump and Fox News: “Trump is like an improvised actor who can do it. Not perceiving the truth. He’s addicted to TV shows that tell him he’s right when he’s wrong. So he’s misled by Fox and Fox & Friends and then misleads everyone else. “There was no evidence, no examples, just an opinion taken as fact.

He reached out to other liberal journalists for support: “As Peter Baker wrote this weekend, dishonesty defined the Trump presidency and the American system has never quite figured out how to respond,” as Politico recently noted , It is up to the President and his allies to make a sport in which minor incidents are plucked from local news feeds and skewed into data points of a major conspiracy. “

This is exactly what his own network has done repeatedly.

This wasn’t enough for the left host, who emphasized the importance of getting Biden on the air. Stelter remarked: “[Trump] Keeps tells fans that Joe Biden can only win if the Democrats cheat. That smelly little lie is basically why this election is a test for America. The truth is on the ballot.

This shouldn’t come as a surprise to most of you, but lines like the one Biden said during his DNC acceptance speech.

As important as the truth is, CNN and other left-wing networks gave it away to discuss DNC issues, cover their candidate, attack the president at every opportunity and focus on keeping the fear of the future in their hearts and minds bring the viewer. And yet, they wonder why people don’t trust the media.

This CNN trend was sponsored by America’s Best Contacts & Eyeglasses and Amazon. Click the links to share your thoughts.

A copy of the November 1st coverage is included below:

BRIAN STELTER: The coming days are a test for American democracy. The world is watching live through this network and others. America passes this test by remaining tied to the truth. America cannot pass this test when lying politicians and propagandists drown out what is true and replace it with what they want to be true.

Failure means succumbing to fantasy and conspiracy theory, hatred and division, and there is already too much of that. The mistrust is so great. In politicians, in the press, in each other. This country needs an injection of confidence. An infusion of trust. And maybe it starts right here. In these lines.

One of the many, many things that this election is about is the truth. If you feel like you are at war with the truth, you are not alone. The past four years have been a daily attack. I could spend this entire hour reviewing and debunking the last week of the President’s mendacity. Trump is like an improvised actor who can do it. Not perceiving the truth. He’s addicted to TV shows that tell him he’s right when he’s wrong. So he’s misled by Fox and Fox & Friends and then misleads everyone else. As Peter Baker wrote this weekend, dishonesty defined the Trump presidency and the American system has never figured out how to react. This is true.

But I know one thing. Staying on the side of the truth is important. May we follow him wherever he goes, so watch out for malicious actors spreading disinformation, domestic disinformation, and Twitter armies trying to make a fringe idea really popular in the days to come. Watch out for arguments through anecdotal tactics. They grab a story here, they grab a story there. They are trying to claim that election fraud is widespread when it is not. As Politico recently noted, the president and his allies are doing a sport that plucks minor incidents from local news feeds and twisted them into data points of a major conspiracy.

Indeed, Trump sees conspiracies everywhere. He keeps telling fans that Joe Biden can only win if the Democrats cheat. That smelly little lie is basically why this election is a test for America. And a test for the American media. The truth is on the ballot. The truth is actually always on the ballot. And Biden has based himself on this fact with the slogan “Truth overlaid”. But Democrats have no copyright in the truth. Democrats have lied to us before. You will do it again. The controversial approach of the media that you saw in the Trump years that produces lies serves us well no matter who holds high office.

Of course, different degrees of deception deserve different treatment. A delusional president is a much bigger thing than a candidate who just dodges questions. But in all cases the media must challenge power and the media must stay on the side of the truth. Edward Luce recently said it was a bad sign for democracy when confidence is gone. He said fear is the glue of autocracy and trust is the lubricant of democracy. Without trust, he said, you are in trouble.

That is the main feeling I have about this election, which was carried out with very little confidence and on the one hand without good faith. This is Edward Luce, the Financial Times finance editor. There is currently little trust, but it is in great demand. May these elections help rebuild trust and be guided by the truth instead of losing more of it. Now we know America is scared right now. Some nervous excitement out there, a lot of fear too. What should the press do at these crucial hours to instill confidence and certainty in the election results?