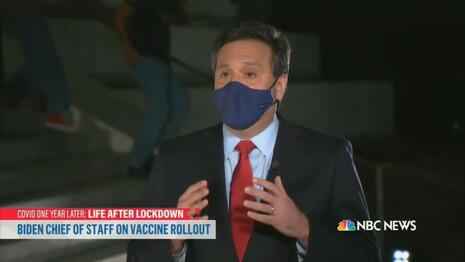 Team Biden has an ongoing lying problem when it comes to the Trump administration’s allegedly dire record on vaccines. You could see it again in a prime time NBC News coronavirus special on March 11, A Year Later: Life Under Lockdown.

On the steps of the Lincoln Memorial, moderator Lester Holt suggested to White House Chief of Staff Ron Klain that the Biden team “had” the pandemic response and asked “what took so long with the vaccines”.

Klain automatically blamed Trump for this: “We inherited a vaccination system that moved at a snail’s pace and we had to accelerate. We had to buy hundreds of millions of doses of vaccine that had not been ordered. “Holt didn’t question that.

Klain said something similar at Meet the Press days after inauguration: “But the process of distributing the vaccine, especially outside nursing homes and hospitals across the community, didn’t really exist when we got to the White House.”

This was echoed by Joe Biden at a Pfizer manufacturing facility: “A little over four weeks ago America had no real plan to vaccinate most of the country,” said Biden, continuing that Trump had “failed to order enough vaccines.” Mobilization of efforts to administer the shots, establishment of vaccination centers failed. “

Or an echo from Kamala Harris on HBO: “There was no supply! …. There was no national strategy or plan for vaccinations. We left it up to the states and local leaders to find out. In many ways, we’re starting with something that’s been raging for almost a year. “

Perhaps because they vigorously checked Trump’s bragging rights about coronavirus, the “fact checking” sites shouted the Bidenite nonsense that Trump did next to nothing. On March 12th, Twitter created a thread under the somewhat misleading headline “There was a vaccination distribution plan under Trump, but according to PolitiFact, Newsweek and FactCheck.org, Biden has expanded it extensively.”

This didn’t exactly summarize the Biden corrective tweets they put together below.

Did vaccines move “at a snail’s pace”? On January 15, the week before Biden was sworn in, 10.6 million Americans under Trump had received a COVID vaccine, according to the Centers for Disease Control.

Didn’t you order enough vaccines? The federal government had completed the purchase of at least 800 million COVID-19 vaccine doses as of December 31, with delivery by July 31.

The Trump administration advocated a flexible and federalist approach to coronavirus restrictions, as well as coronavirus vaccines. Leftists would say that allowing states to control everything instead of the federal government is equivalent to “no national strategy”.

Democrats and the media have condemned Trump for “politicizing” the pandemic, which is a bad joke, as they clearly politicized it shortly after its first impeachment attempt stalled. Trump called their political exploitation a “joke” and then they claimed he called the virus a “joke”. Even today, Team Biden is relentlessly beating Trump as a scapegoat for everything that ever went wrong. It is nice that the “fact checkers” can stay on this subject, even if the “objective” networks cannot.

PS: When I saw Holt play a show at the Lincoln Memorial, I remembered when Donald Trump was hosting a Fox News town hall there last May, NBC’s Andrea Mitchell complained about the venue. Kyle Drennen reported it. “For many people this is sacred ground. And to watch a cable news broadcast, a virtual town hall where the President and correspondents question him, anchors question him at the feet of Abraham Lincoln! … what about the whole national park and other security guards that had to be out there during a pandemic, in a shutdown! “

The ethics of broadcasting from the monuments are as situational and partisan as anything else in the “mainstream media” business.