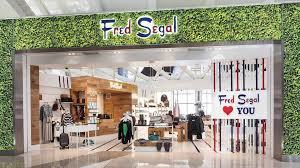 Fred Segal’s became known as a high-end fashion boutique with a young and hip vibe. The shops attracted customers such as the Beatles, Elvis, Diana Ross, the Jackson Five, Nicole Kidman and Jefferson Airplane.

When Segal opened his store in West Hollywood, 85 percent of the inventory in the 350-square-foot store was blue. Later, in a 700 square foot store on Santa Monica Boulevard, Segal’s figure-hugging fashion was a huge hit. This led to a jeans-only store in Melrose in Crescent Heights during the heyday of this retail strip in 1960 and soon created the first “jeans bar”. Fred Segal’s denim designs for men and women sold for $ 19.95, while jeans were typically $ 3.

There are two Fred Segal locations established by Segal which are home to several independent boutiques. The two stores are not linked, although they use the same logo and have the same annual sales, but each has its own flavor. The Melrose site was run by Segal’s nephew Ron Herman, the other in Santa Monica.

Segal is survived by five children, ten grandchildren, two great-grandchildren, his wife Tina and their two children and their grandson. Segal’s family has asked those in mourning to consider donating to the Segal Family-United World Foundation.