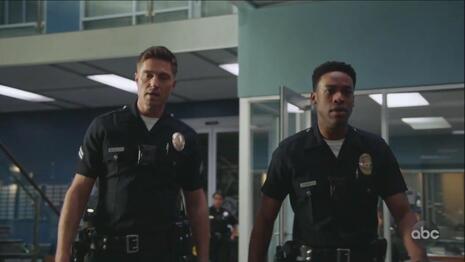 It’s the third episode of ABC’s The Rookie, and the story of that “polarizing” officer Doug Stanton (Brandon Routh) who wreaks havoc at the LAPD continues. This was certainly certain, since Officer Stanton was featured on the January 10th episode, “In Justice.”

In the January 17 episode “La Fiera,” Officer Stanton physically assaults an innocent young black man who does not match his suspect’s description and then threatens to arrest the man’s entire family for attempting to intervene while he points his gun at them all over-the-top scene, with the rookie he trains, Officer Jackson West (Titus Makin Jr.), watching everything uncomfortably.

Stanton: Hey. There is our type.

West: I don’t think so. Uh, the hoodie is green, not blue. The suspect is 6 feet. The guy is too small.

Stanton: Because a scared RP with a gun in his face will tell the difference between green and blue? 6 feet and 5’6 “? Come on. Control, 7-adam-07, 8th and Bronson, have a possible 211 suspect. Code 6. Let’s go. Hey. LAPD. Show me your hands. [Music heard through headphones] I said show me your hands now! [Stanton tackles young man]

Stanton: Turn around, fool! On your stomach!

Stanton: Hands behind your back.

Stanton: For your and our safety.

West: See, sir, please, everything will be fine. We just have to check you out.

Mother: What are you doing ?! This is my son!

West: Everything will be fine. It will be alright.

Stanton: Hey! To back up!

Young man: I haven’t done anything.

Mother: let my baby go! Get off me!

Father: Take your hands off my wife!

Mother: are you crazy ?!

Stanton [pointing gun]: Everyone on the ground!

West: Control, 7-adam-07, we need a supervisor out here. Code 3. Everyone, just stay where you are. Just – give us a minute to explain.

Stanton: Everyone on the ground now!

Not only does the audience have to be presented with such an intense scene, but they are also hit over the head by how “polarizing” Stanton really is and a racist. It is so melodramatic that it mainly offends the intelligence of its viewers.

Immediately after the commercial break, the show goes back to the aftermath of the scene in which the family particularly directs their disgust at West and Stanton continues to unnecessarily inflame the situation:

Doug: Everyone down on the floor!

Officer Bradford: What do you need?

West: Are we arresting the whole family?

Stanton: What the hell did I just say?

West: Wait, even the grandmother? Are you serious?

Woman: Hey, I’m recording this. I see you.

Man: It’s always the same with you.

Mother: Take the handcuffs off my boy!

Father: Not as sorry as that fake brother. Uncle Tom clearance sale.

Stanton: We found the suspect and ordered him to stop.

Bradford: H-stop, stop. You – you pinched that guy half a mile from here two minutes ago. Didn’t you hear that on the radio?

Stanton: I’m arresting them all. Attempted attack on a police officer, resistance to arrest, criminal threats.

Bradford: What are you doing here? There are cameras everywhere. You caught an innocent man. The DA is not archived.

Bradford: You got the wrong one.

Stanton: You are an executive. It is your call. [ Siren wailing ]

Bradford: Control, 7-adam-19, Code 4. Shut down the Code 3 units and cancel the supervisor. Jackson, come here. Unleash this gentleman with an apology. Talk to the family and explain the situation. See if you can dust them off, okay? OK. I’ll join you in a minute.

Stanton: Now are you going to kiss her ass?

Bradford: It’s saying the least we can do.

Man: He should lock him up.

West: Uh sir, I am – I’m really sorry for the confusion.

Grandmother: Confusion? They just handcuffed my grandchild and pointed guns at all of my family.

West: Look, ma’am, we’ve been looking for a suspect who matches your grandson’s description.

Mother: We need to speak to your sergeant.

Bradford: Of course. Ma’am, here is my business card in case you have a complaint to make.

Father: Bet we do?

Later, in another of the episode’s many plots, Stanton shamelessly explains that drug masters are just better off killing each other. This leads to the predictably scripted scene where other characters discuss their thoughts about him, with Officer Chen directly saying, “Stanton is a racist,” and an opportunity for Stanton to make another racial assumption, this one going west. Stanton believes West came to UCLA because of an athletic scholarship, rather than West’s high GPA and because he’s the Valedictorian.

Finally, there’s the dramatic interaction between Officer West as he enters Sergeant Wade Gray’s (Richard T. Jones) office just as the older man leaves to request that Stanton leave. Officer Tim Bradford (Eric Winter) storms in to support West. Although Gray ultimately agrees to send Stanton to his desk, West is not satisfied. He even warns Bradford that “silence is complicity,” a line previewed last week:

Gray: Officer West. I’m on my way out. Can that wait till morning?

Gray: In what way?

West: To be honest, in every way. Who he attracts, how he – how he treats color suspects, what he says.

Gray: Give me details.

West: To say that a crime “has no victims” just because the deceased was connected [with a gang].

Gray: Look, a lot of cops feel that way. It’s an attitude that I disagree with but that doesn’t violate any rules.

West: I – it’s not just that, sir. Y-yesterday we stopped a man who didn’t match the suspect’s description. He was outside of his own home.

Gray: I know that. I’ve read the report.

Gray: The last time I checked, the police have discretion to make arrests.

West: It wasn’t justified, sir! Look, Stanton has escalated the whole situation to the point where it became dangerous for both us and this man’s family.

Gray: Bradford, we’re in the middle of something, so–

Bradford: I think I know what this is about. Look whatever Officer West tells you, I’ll stand by him.

Gray: good. I’ll put Stanton on the desk until we find out.

West: With all due respect, sir, that’s not good enough.

Gray: Excuse me, son? You’ve been on duty for five minutes. I have 25 years. You don’t know what I had to endure, what your father had to endure to get this far. You stand on our shoulders.

West: And yet the water is still over my head. Tell me that, sir. What were all of your sacrifices for

Gray: Get out of my office, West.

West: Why aren’t you?

Bradford: I am. It’s just … I’ve made excuses for stitches like Stanton my whole life, thought it wasn’t going to change so I would let it go, I gave them a pass.

West: It wasn’t a passport. You gave them permission. Silence is complicity, sir.

Bradford: Yeah. I understand that now. But Sarge is right. Benching Stanton is the only recourse he has.

Similar to last week’s episode, this one felt pretty crowded and cramped as she tried to balance this bad cop narrative with all sorts of other storylines.

On the other hand, what else can we expect when a group like Color of Change, which turned The Rookie and other shows upside down, allegedly committed a 153-page “pretty damn” report on a slew of racist sin police tv shows.

A description for the Jan. 24 episode “Sabotage” said: “Officer Jackson West’s relationship with his new training officer, Stanton, has expanded and he is beginning to work with Sergeant Gray to find a solution.”

Great, with everything else, it looks like we may enjoy another increasingly crowded, melodramatic and poorly written episode of The Rookie next Sunday.