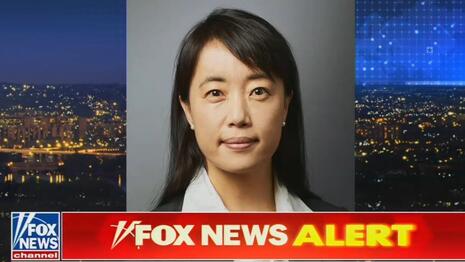 A Yale University psychiatrist who practically made a career by remotely diagnosing President Donald Trump as dangerously mentally ill has been fired for gross violation of the Goldwater Rule. Dr. Bandy X. Lee is not an obscure doctor as she has appeared frequently on MSNBC and CNN shows for the past four years and has been prominently written with a positive bias in magazines like the New York and Washington Post.

Her lawsuit against was written by Mihir Zavery in the New York Times on Friday. The breaking point was that Alan Dershowitz responded to allegations of his association with Jeffrey Epstein that he had a “perfect sex life” with his wife:

In January 2020, she compared Mr Dershowitz’s wording with Mr Trump’s prominent use of the word “perfect” and suggested in a tweet that it might reflect a “common psychosis” through which Mr Dershowitz had adopted what she referred to as Mr Trump’s “grandiosity and impunity at the level of madness”.

Days later, Mr Dershowitz emailed Yale a complaint, saying that Dr. Lee violated the code of ethics by making a public diagnosis without examining him.

The Times noted that Yale spokeswoman Karen Peart said Dr. Lee is a “volunteer faculty member” at the medical school and has received faculty membership in exchange for up to four hours of classes per week. Voluntary faculties are not permanent professors. When the contract expired, that was it.

Claiming that Alan Dershowitz, along with nearly all of Trump’s supporters, “took over Trump’s symptoms entirely through contagion,” went too far, as reported in Tuesday’s Yale Daily News:

According to court records, after Dershowitz emailed Lee on Jan. 11, the chairman of the psychiatry department, John Krystal MED ’84, warned Lee that the department “would be forced” to resign [her] Teaching role ‘”if she continued to make similar public statements. She continued to tweet about Trump’s mental fitness, even after Krystall’s warning. Lee then met with Krystal and other unnamed faculty members and learned that, according to an excerpt from an email on the file, she was “violating psychiatric ethics.” According to court records, Yale refused to enter into further discussion or further investigate the allegations. On May 17, 2020, Lee was notified that she had been terminated. She appealed the decision several times, unsuccessfully, in August and September.

Krystal wrote to Lee in a September 4 letter included on the court record that the division’s primary consideration in dismissing it was its “clinical judgment and professionalism” after publicly sharing its “diagnostic impressions” of Trump and other personalities of public life. Krystal stressed in the letter that the termination was “not due to the political content”.

“Although the committee has no doubt that you are acting on the basis of your personal moral code,” read the letter. “Your repeated violations of the APA’s Goldwater Rule and your improper transfer of warning from the treatment setting to national policy have raised serious doubts about your understanding of the crucial ethical and legal principles in psychiatry.”

The American Psychiatric Association’s Goldwater Rule states that it is unethical for psychiatrists to officially comment on the intellectual abilities of a public figure unless approved or following a medical examination.

It’s like the Goldwater Rule was written for completely irresponsible psychiatrists like the advertising dog Bandy X. Lee.

Am I Nonetheless Anticipated to Put on a Blazer to Work? Your 2021 Workplace Apparel Questions Answered